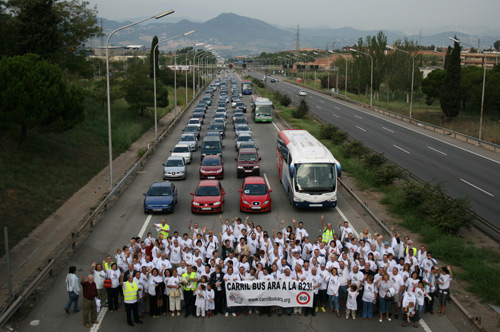 A historic day for public transport. On Sunday, September 23, 2007, public transport made history in the Baix Llobregat. For the first time in Catalonia, there has been a real demonstration of a bus lane on an intercity freeway. One of the aims of the test, consistently to verify the capacity of a fourth lane destined to public transport from the narrowing of the current lanes, has been successfully achieved. The current width of the lanes is oversized because it was designed to go more than 120 km/h and does not fit the reality of a saturated path where the new 80 km/h environment limit has to be applied.

Great capacity. The demonstration of this bus lane has also served to visualize the great capacity of public transport: with only one bus lane, 27% more passengers can be transported than with 3 lanes of collapsed private vehicles. The simulated bus lane, with only 3 buses, gave a 27% additional capacity compared to the 100 cars in collapse that participated in the test (due to the average in the metropolitan region of 1.18 people / vehicle). During the test, the bus lane has hosted 150 seats (50 seats each one) and the three lanes of private vehicles, 120 seated people. About the consumption of space, it should be noted that a bus lane represented buses moving but the three lanes of private cars, despite occupying more length, were in a situation of congestion (speed less than 50 km/h).

A success of everyone, for the benefit of public transport. The test of the bus lane on the B23 was an initiative of PTP carried out thanks to the collaboration of the public transport operators, the Catalan Traffic Service, the Mossos d’Esquadra and the 100 volunteers who have contributed their private cars to claim a better alternative in public transport. Without the close collaboration of all these people, this historical milestone could not be achieved in favor of the bus lane on the B23. From the PTP we want to thank to all those who have made it possible, because they have written part of the history of public transport in the Baix Llobregat.

Impulse to the future. In addition to demonstrations of location and capacity, this test has served to claim the creation of the bus lane on the B23, which is more necessary every day. We hope that this action will serve as a public demonstration for the benefits of bus and bus-VAO lane access to Barcelona without spending a lot of money in long-term new infraestructures. Citizens who want to adhere to the Manifesto on the bus lane on the B23 can visit www.carrilbusara.org.

VIDEO OF THE STATIC TEST