The PTP has participated in the social participation space of the COP25 climate change summit with an intervention on the environmental, economic and social advantages of the use of transport in common. Our intervention has managed to capture the attention of the attendees, who during the time that we have been able to have (one hour) have followed our exhibition with attention and with whom a rich subsequent colloquium was established. You can find the link to the presentation below.

Our intervention has focused on the need to move towards mobility based on collective and intermodal transport, which is not based on the possession of a private vehicle to make displacements effective. New generation motorized vehicles, such as electric and autonomous vehicles, must be compatible with this idea, either acting as “last mile” transportation or as a carsharing service.

Why do we insist on the importance of decarbonising transport? The imminent need to reduce CO2 emissions make public transport a vital tool in the mobility of the future.

The objective of transport decarbonization also requires that the railways progressively replace the continental-range displacements that are now covered by the aircraft. For this reason, we introduced in our intervention the explanation of two of the lines of work that the PTP is carrying out in this area:

The audiovisual explanation of the elements of the campaign was complemented by the exhibition of two of the roll-ups that make it up, and an explanatory booklet to publicize those interested.

If you want to get more about the campaign, you can go to the website: https://mestransportpublic.cat/

The PTP team that has made this participation possible has been formed by Dolors Clavell, Gina Montesinos, Susana Pascual and Daniel Pi. and Uma, of course! 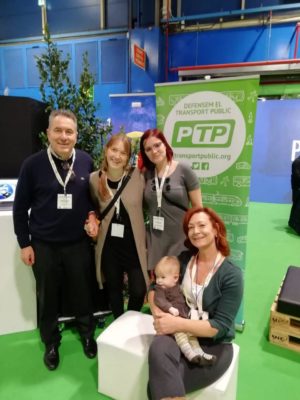